There are many who will say that the best large capacity toaster oven is the Breville BOV900BSS Smart Oven Air. It is indeed a highly rated countertop convection toaster oven on Consumer Reports and has many raving fans on Amazon as well. This customer gave some great feedback on both its pros and cons.

Then there are others who believe that the Cuisinart TOB-260N1 CHEF’S Convection Toaster Oven is even better. We will look at each of them below.

Included in our comparisons is a much simpler, more cost-effective and even larger toaster oven. We hope that our observations will help you to decide which is the best large capacity toaster oven for you.

Disclosure: Affiliate links are on this page. That means that if you click through and make a purchase then this site will likely receive a small advertising fee.  Our legal pages are found here. 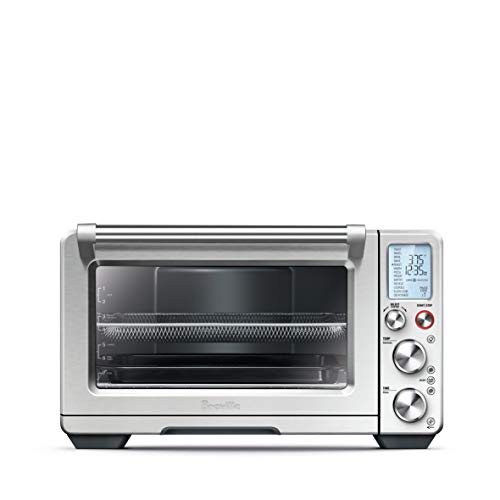 First on our list is the Breville BOV900BSS Smart Oven Air It is Breville’s newest model and is large enough to handle a 5.5-quart Dutch oven or a 14 pound turkey. When they redesigned this model from the Breville BOV800XLthey added many more functions and an interior light. The slow cook function is really helpful for cooking roasts and stews. There are many recipes that are better when they can be cooked slowly as that enables the flavors to blend together better.We also like the ability to be able to see your food cooking without having to open the door.

In all… the Smart Oven Air has 13 functions as opposed to the 9 of the Breville BOV800XL. It is also wider on the inside. The element IQ means that it automatically adjusts the individual heating elements to ensure a constant even temperature throughout the oven. The 13 menu functions make suggestions for the best temperature and time needed for your culinary creations.

This is a large step up from just a toaster oven and competes with some of the top luxury countertop ovens. It just happens to also make great toast. Most users remark about how much better their bread, cakes, cookies, and many more items come out when cooked in this oven. It has been stated that the Breville, “Toasts evenly, makes delicious cookies, bakes perfect pizza, and roasts succulent meat.” When using the convection option, your cooking time can be reduced by as much as 30%.

Some of the additional features include the ability to air fry your food. Not many other “convection toaster ovens” can compete with stand alone Air Fryers but the Breville can. (Why buy a stand-alone air fryer when you have the Breville Smart Oven Air which can do it all?) Read about recommended Air Fryers here.

The Breville can Dehydrate your fruits and vegetables and even “proof” your bread dough. The slow cooking feature means that you can place your food in a 5 quart Dutch oven and slow cook for up to 72 hours depending on the temperature. The length of time available does vary by temperature setting.

This model has 6 independent quartz heating elements that move the power where it is needed. the Element IQ® means precise delivery and stable cooking temperature at the right time to ensure a precise cooking process.

On the con side, there were two things which we wanted to note:

We actually recommend the Extended Warranty for any product you purchase on Amazon as the manufacturers warranties may not be as good.

Other than those two things, we found that most people who used their Breville ovens felt that they were worth the price and if they went out on them they would simply purchase another. It makes their lives that much easier.

You may also want one of these cookbooks to go with your new oven. The images are clickable and take you to Amazon for more information.

The name Cuisinart has been around for a long time and they do make solidly built and reliable small kitchen appliances. They also have a decent 3-year limited manufacturer warranty on this convection toaster oven. Most other toaster ovens come with only a 1-year or a 2-year warranty.

Cuisinart offers you a multitude of cooking options which seems to make your large kitchen oven forgotten. You can toast up to 9 slices with perfect results. This model comes with a 13” pizza stone and a recipe booklet. That will delight many cooks out there. There are many uses for a pizza stone beside just cooking pizza. The recipe booklet is a nice touch as well. How many times do you go into the kitchen and just need some ideas because you are tired of the same old thing?

SIMILARITY BETWEEN BREVILLE AND CUISINART

The BrevilleSmart Oven Air has the element IQ with 6 quartz heating elements. The Cuisinart has what they call Exact Heat sensors to calibrate 5 quartz heating elements to the best settings for each function. To us, that sounds much the same. It is a feature though that you will not find in ovens that are less expensive. Both of these ovens are great for cooking foods evenly.

The Breville has 13 functions but this Cuisinart has 15 functions. They each have their own specialty functions but most are similar. For instance, the Breville can be set to slow cook for up to 72 hours depending on the set temperature. The Cuisinart also has a dual cook function and can slow cook as well… Just not as long.

The Breville can be used to proof bread dough, Air Fry your meats or veggies and also Dehydrate foods. The Cuisinart does not have these functions. The Cuisinart’s leftover function is similar to Brevilles “reheat” function. Both ovens allow you to set your own temperature and time if you decide not to use a preset.

This Breville has a larger interior and can hold larger pans and casseroles than the Cuisinart.

Both ovens include two cooking racks which can be used at the same time.

Both Breville and Cuisinart include an interior light.

Choosing between the Breville BOV900BSS Smart Oven Air and the Cuisinart TOB-260N1 CHEF’S TOASTER OVEN can be difficult. They both are built to quality standards. They each have many automatic functions that make cooking a breeze. Here are some differences for you to consider.

Sometimes you have to bypass higher quality and useful features for affordability.

Other large affordable toaster ovens can be found here.

SO WHICH IS THE BEST LARGE CAPACITY TOASTER OVEN?

So yes, if you are looking for the best large capacity toaster oven, you need to decide just what features are the most important to you.

From a standpoint of the best quality and features, we would have a hard time choosing ourselves. But we believe that the Cuisinart has a slight edge on the quality and the Breville has an edge on the different kinds of uses that will benefit a consumer.

The Cuisinart also has the best warranty. But perhaps the features that are the most important to you would be in the Breville. Both of these are top rated models. In Consumer Reports, there was just  a few points difference.

We hope that we have supplied you with enough information to help you choose what is best for you.

Disclosure... As an Amazon Associate I earn from qualifying purchases.